Indoor rowing competition Alfa 2020 will be held on the 25th of January in Tallinn Sports Hall. All the strongest Estonian rowers who are fighting for a place in the coxless four in Tokyo Olympic Games are represented. This year they have to put up a fight with really serious competitors.

Most of the men who are candidates for coxless four are training in Finland ski camp at the moment. “They are coming to Tallinn from capacity trainings and without any special preparation for this competition,” tells the head organizer Mihkel Klementsov.

Rainar Piik, who surprised everybody last year, has been training really seriously on rowing erg. Rainar Piik hasn’t done on-water rowing but last year he was the leader of men’s’ race almost to the end. On the last 100 meters Tõnu Endrekson passed him.

Rainar Piik is planning to compete in February in indoor rowing World Championships. “Thanks to preparing for that he is really strong front runner against our best indoor rowers like Tõnu Endrekson and Allar Raja,” said Mihkel Klementsov.

“I wasn’t able to train as much as I would have liked to in October and November, but last few weeks have been really intense,” told Šurmei, who wants to win Alfa. Although his preparations are mostly focused on 2000 meters in Paris, he still trains at least once a week with an aim to race well in Tallinn.

“I’m planning to finish around 2.40-2.45,” guessed Šurmei. Unfortunately, his life partner Olena Burjak is unable to come to Tallinn due to preparations for Tokyo Olympic Games.

Alfa will be held already for the 27th time. It is one of the biggest indoor sports events, where besides professional athletes compete hundreds of practitioners from Estonia and nearby countries.

Registration is open on webpage www.soudespinning.ee

What you can read next 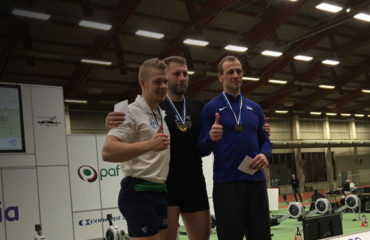